Jobtech Development is the part of Arbetsformedlingen, the Swedish Public Employment Service (SPES), leading the effort to create technical solutions for the whole of the labour market. These solutions involve:

In the summer of 2019 one of the teams at Jobtech Development, named Gravity, was asked to create an implementation following the MyData principles for the Swedish labour market. The goal of the project was to create a universal, electronic CV the job seeker could use to apply for the majority (if not all) of the labour market.

As a first step towards this direction, the team developed a system to allow third-party services to add a button to their job application forms enabling the job seeker to apply with their CV previously created on the Arbetsformedlingen platform.

Through user research, we were able to identify multiple issues that the program could solve. For one, it was identified that jobseekers were wary of having to enter the same information multiple times in the different job application websites; a problem amplified by the more than 1,000 job-boards and recruiting sites in Sweden. Also, research showed job seekers wanted a program to feel safe and secure when allowing services to access their data online.

Using the above information, we built a program using the following steps:

After generating this design and while we started working on the implementation, we found issues that the data within Arbetsformedlingen was structured too robustly for internal use and therefore, wasn't suitable for outside implementation. First, because the structure was created by the internal service, it was not easy to share externally. Second, the information was too complicated for customers to be able to understand without any assistance. So, the search for the perfect data structure began.

After looking at several standards, team Gravity decided it would be best to use the HR Open standard, a bonus is that because the tool is so robust it will be able to be used in many other projects! It was vast enough to cover any potential needs for data structure that any part of Arbetsformedlingen would require. Most importantly, it was an open standard that could be easily shared with everyone in the labour market. The fact that the standards are so well documented and supported with use cases makes it easy for us to implement and for our partners to understand and accept.

We're excited to have found HR Open and the standards because they can be used as common language for the market to communicate and share data. Having a common language facilitates an easier sharing of data between actors, agencies, and companies and produces better, more flexible solutions that will serve both the jobseeker and job-provider.

At the writing of this post, the standard has been implemented and the solution is ready to be deployed publicly. The world we live in has changed dramatically and fundamentally and solutions that make it easier for the labour market to function and move forward during and after the crisis it is facing are desperately needed and should be sought after. 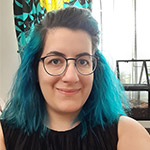 Markella has formal training as a bio and health informatician with a focus on data science. She has worked within that field in the past and at the moment is applying her skills towards providing more comprehensive digital solutions for the Swedish labour market. She believes that data have a unique power to drive organizations and society in general towards a more open, free and just future.

If you are an employee of an existing member company, you are an existing individual member, or you just need to create a non-member login, we invite you to set up an online account to access your profile, transactions, event history, and more.

The members of HR Open Standards invite and encourage you to join! By working together, we can achieve our mission to maintain and enhance our industry as a whole.

All membership applications must be approved.